Patrick Fontana takes notes drawn from philosophical seminars, books, to produce visual and sound digital installations, performance videos. He continues to create an interface between his artistic practice and the social field, especially with sound creations based on poetic and literary texts.

link to the application http://app.ethica-spinoza.net

link to the internet site : http://ethica-spinoza.net 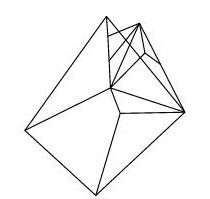 “I shall consider human actions and desires in exactly the same manner, as though I were concerned with lines, planes, and solids.” Spinoza, Ethics III, Preface.

Among all the texts that I have studied and used in my work as an artist, Spinoza’s Ethics is the one that most moved me and that has brought me a great joy. A new dimension of thought has been offered to me.
What immediately aroused my interest, then my passion, is the system of thought set up, the way in which all texts interact. A meeting so strong with a text, besides difficult, questioned me and get me to work. 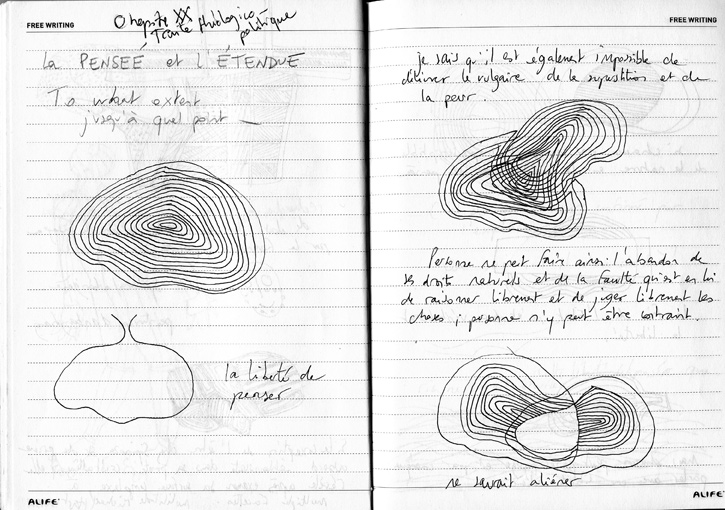 notes dessinées on Spinoza
My first idea was to make the Ethics a digital installation. All texts (932) were entered in the form of geometric projections in perpetual motion, on a three-dimensional digital plane. The installation was already accompanied by sound recordings of philosophers, researchers, and enthusiasts of Ethics. 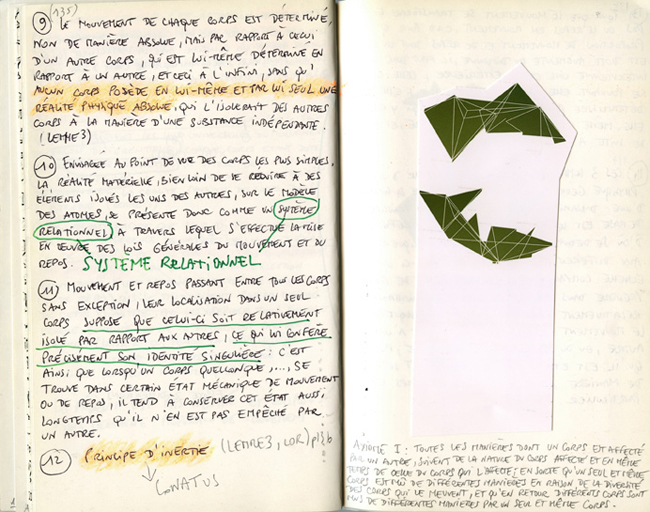 But the spectacular side of the installation did not suit me, and moved me away from the desire to propose an immediate encounter with the philosophy of Spinoza by plunging the reader directly into the Ethics.

The idea of a digital application soon came up to me because it made it possible to expose the text in an innovative way without proposing my interpretation.
Creating an application was totally foreign to me, it took me time to learn and find the right people to accompany me in this project.

In 2013, I received grants for Ethica of the Centre National du Cinéma et de l’image animée (CNC) and of Société Civile des Auteurs Multimédias (SCAM) which reward artists who work on new digital writings. The project could start. 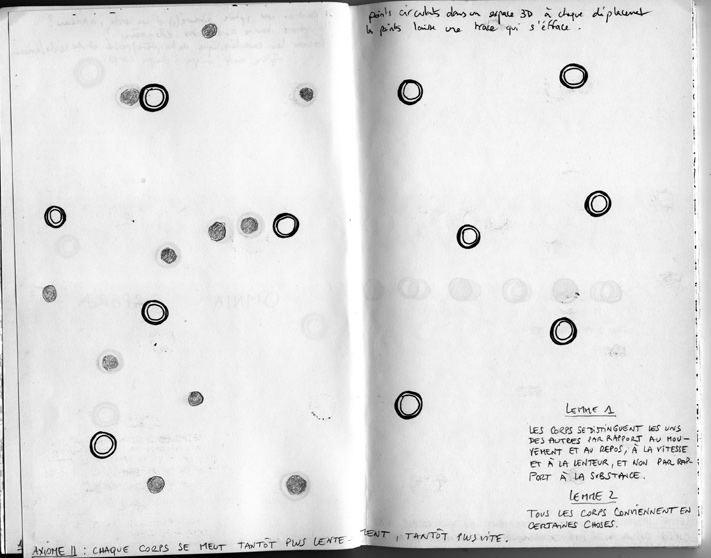 I started contacting philosophers to talk about the series of video reviews that would accompany the user in his readings of the Ethics. They were immediately enthusiastic and by the end of 2013, more than 70 philosophers from around the world wanted to participate to this project. Today, they are more than a hundred.
The many philosophers I encountered throughout the development of the application helped me to better understand the Ethics, why this book was also important to its readers. I also heard their expectations of a digital tool. They trusted me and encouraged me to continue Ethica. 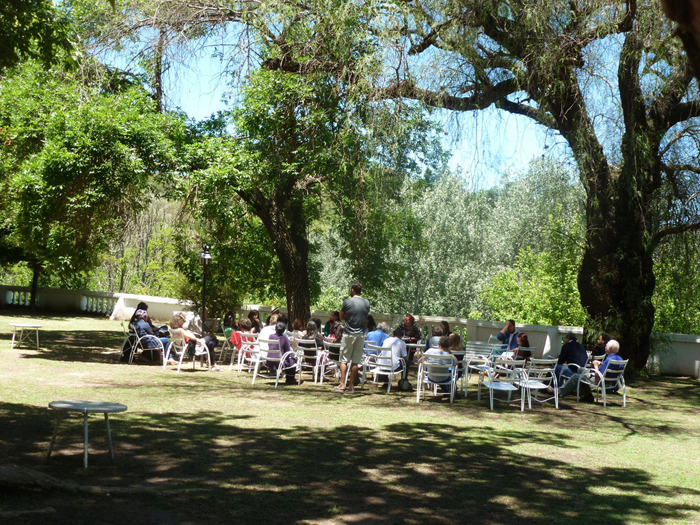 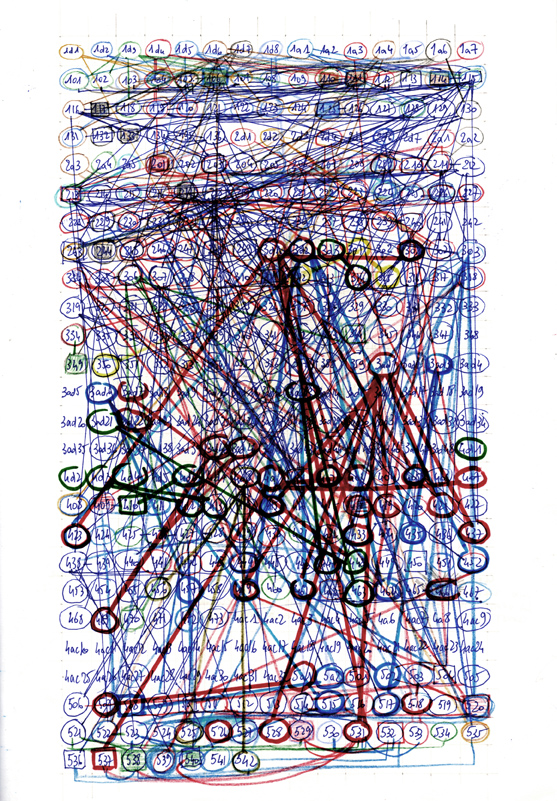 The place of the computer tool in my work has always been questionable. I need to demystify the technical devices I use.

The first graphic on all the connections between the texts was made with the software Pure Data in 2012.

In 2013, I proposed to Vincent Rioux, head of the digital department of the School of Fine Arts of Paris, to develop together a 3D digital graph (called ALLi -ALL the links-) of the connections between the texts. 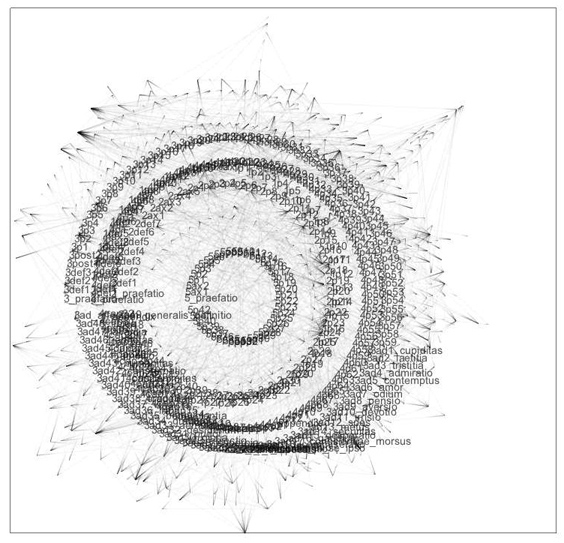 export01 from Patrick Fontana on Vimeo.

ALLi did not allow to read the ethics from the connections between the texts, in a fluid and intuitive way. The 3D became too sophisticated and could be a brake to read the text.

So I developed other graphs. 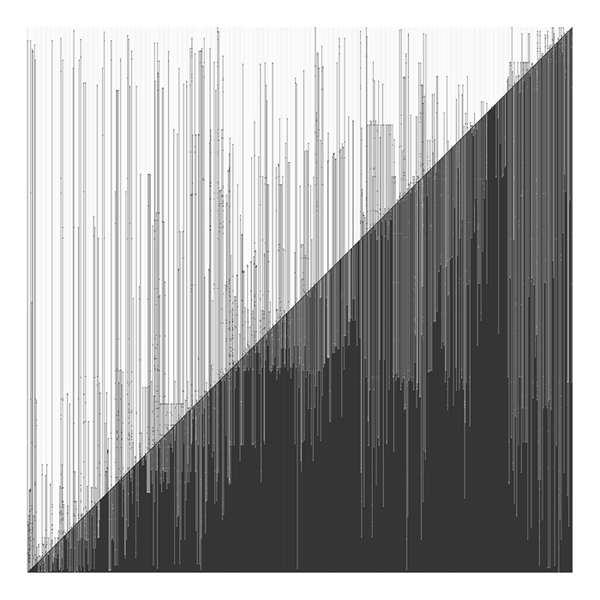 The graphic the Rigorous Counter-Point is the basis of the developments found in the application.

The first version of the application is the result of this artistic research. It is incomplete, because the lack of funding has so decided, for now.

We have not yet found funding for video commentaries of the 100 philosophers who wanted to participate. Some of them have made, already, their choice of texts to comment. You will find the list of these choices on the video page of the website.

In contact with the philosophers I met, my artistic research evolved. I put aside the 3D graph to propose a dynamic reading of the text. The next step will be the development of another graphic, the strict Counter-Point (description available on the website).

We hope, my team and I, will continue to increase the application of new tools, new translations, and fund the videos.

But as Henri Atlan wrote to me one day: “Take all your time. Spinoza is in any case a kind of eternity.” 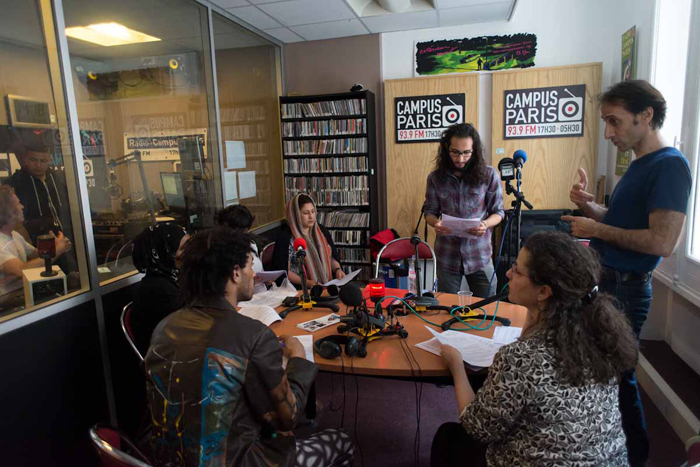 Throughout this work, I sought to develop links between Spinoza’s philosophy and life.
In parallel, I was conducting a workshop of recorded readings, based on texts of poetry and literature, the workshop Lectures de Bouches, with people learning French as a foreign language.  A partnership between the contemporary art center Khiasma directed by Olivier Marboeuf and the basic training workshop (directed by Rose-Marie Ryan) of Emmaüs-Solidarity association, in Paris whera was going Lectures de Bouches. In 2014, I invited the philosopher Nathalie Chouchan to participate to the workshop where we were able to read and discuss Ethics excerpts together. Recordings of personal texts from these discussions were also produced.

I thank all those who accompanied me on this project, in particular, Emmanuel Ryz, producer with me from Ethica, my wife Dominique Brighigni, Pierre-Yves Fave, Nathalie Chouchan, Catherine Le Moulec, Michèle Cristofari, all the philosophers in particular Mauricio Rocha, Roberto Brandão, and Jean-Pierre Dozon, scientific director of FMSH who had the open-mindedness to invite, for two years, an artist, to the  Fondation Maison des Sciences de l’Homme.

The Social and Political Thought Research Group, Brunel University of London participated in the financing of Ethica’s teaser in 2015.